What does HDR stand for? How HDR works? And what is HDR TV?

Here you can learn all those question related to HDR in this article.

HDR is short for High Dynamic Range which is a technique used imaging and photography to reproduce a greater dynamic range of luminosity than is possible with standard digital imaging or photographic technique. (From Wikipedia)

Actually High Dynamic Range photograph can be achieve by post processing of taking a series of images and combining them with exposure bracketing. The photography practice is not only used for HDR cameras or camera phone, but also used for video files, which would be applied on HDR TV. Although both high dynamic range on TV and photography in images having a greater contrast between light and dark, but the way they work is slightly different. Even HDR photography and HDR video share a same name and some common points, they are still different. So let’s talk about HDR video for TV and HDR for Smartphone photography separately on below.

HDR Photography for Camera, iPhone and Other Smartphone

How HDR Works on Photos

HDR photo should be at least merged with two or more photos taken at different exposure levels by some HDR software. Some HDR applications claim to create HDR photograph out of one image, which is not an actually HDR photo, it should be a HDR filter instead. 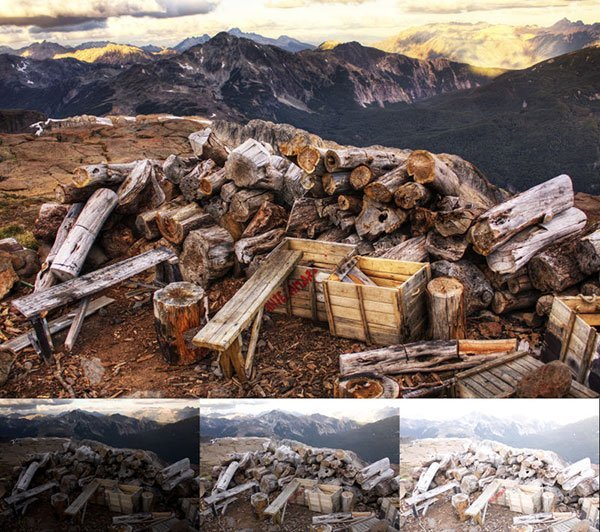 When you turn on the HDR mode of your HDR Camera or iPhone, the device takes photos of the same subject with varying shutter speeds and apertures, and then uses HDR software or image editing program to put images together and high light the best part of each photo. Instead of taking one photo, it usually takes three photos. It is the reason that HDR photos take a longer time than the regular ones. Just learn more detail about how HDR works on different devices as below.

It should be preferably with an Auto Exposure Bracketing function Camera or HDR Camera. You can also adjust the camera setting manually between each shots, but if the pictures do not line-up, the final HDR image might be wired.

As for HDRs on smartphone, your phone can do all the work for you. Just turn on the built-in HDR function by tapping the HDR option inside the camera app. You only have to snap the picture, and then smartphone will take one regular photo together with one HDR photo.

But there are some major drawbacks for the HDR Smartphone, it might be difficult to hold the device still or mount it on a tripod while taking HDR photo. And the built-in HDR is rather weak. You might find the differences between the two photos are not pronounced. However, HDR on iPhone may give you different experience when to photograph a shaded subject set against a sunny sky or more.

As HDR has been around for a long time on iPhone, it works for you no matter if you have the old iPhone 5, iPhone 6 or iPhone 7 or the latest iPhone 8 or iPhone X. In fact, HDR on iPhone is the combination of three shots, which is taken within miliseconds of each other and stitched together into one photo.

Usually it’s hard to achieve perfect exposure of both land and sky, in that situation traditional cameras may let you choose between a too bright sky or a subject lost in the dark. So iPhone creates a High Dynamic Range (HDR) by combining the properly exposed parts of each of the three images and combines them into one that looks seamless.

Then how to take an HDR photo on iPhone or other iOS device? That is easy. Open the Camera app on your iPhone, iPad or iPod touch. And then tap HDR to make sure it’s set to Auto or On and frame the photo. Tap the Shot button and the HDR photo has been taken. Just remember, when taking HDR photo, the iOS device will save one image with HDR and one without, you can choose the one you like to save and delete the other one. 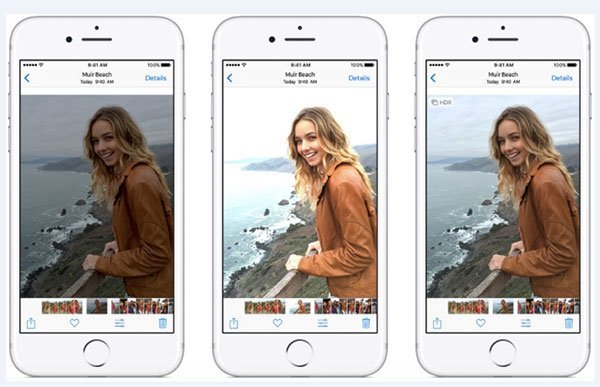 HDR technique is used in imaging and photography to reproduce a greater dynamic range of luminosity. But not all the photos can use the High Dynamic Range for a better looking. Here are some situations that you should pay special attention to deal with HDR photos.

Just as the definition of HDR, the exposure or lighting should be taken into first consideration. When one photo cannot deal with the contrast between different objects in the photo, HDR photograph should be a great help.

Of course, there are many occasions not suitable for HDR photograph, such as the movement photos mentioned. And the high contrasted and some vivid colors scenes are not suitable for HDR as well. But for the skilled photographers, they can also make HDR happen for these occasions with wonderful effects. Here you can get more vivid concept from the following video produced by TECHquickie.

All in one word, HDR photograph should be the magic for lightens of photos. HDR image formats are often called scene-referred. Once you use the HDR mode of your camera, you can use HDR merge to find whether it works for you. Just do not be afraid to have a try, HDR can be a great tool for you getting better pictures.

High dynamic range (HDR) video is currently one of the biggest TV feature bullet points as Samsung is announced HDR10+ and Apple has announced the Apple TV 4K supporting both HDR and Dolby Vision. HDR is arguably the most important and the most confusing buzzword in the TV world now. So what is HDR for TV? How will HDR make video pictures look better than ever? Keep reading and learn all the things related to HDR video technology you want to know.

What is HDR TV? 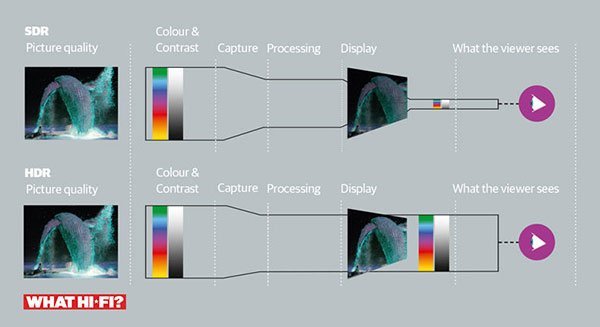 An example of how Dolby advertises its Dolby Vision HDR tech. The left side has HDR enabled. – Dolby

HDR for TV means better contrast, greater brightness levels and a wider color palette to make your films and TV shows look a bit more like real life. HDR promises better pixels to make bright whites to be brighter, for dark blacks to be darker and 10-bit panels to display all 1 billion colors. That means HDR video content on HDR-compatible TVs can get brighter and darker at the same time and show more shades of gray in between. Similarly, they can produce deeper and more vivid reds, greens and blues, and show more shades in between.

The most common format of HDR is HDR10 which is supported universally by Blu-ray players, 4K TVs and game consoles. Besides HDR10, there are still other competing standards in increasing number like Dolby Vision and Advanced HDR by Technicolor. And HDR10+ is a latest standard which tries to build some benefits of Dolby Vision into and open-standard akin to HDR10.

How to Get HDR for TV?

In order to enjoy HDR on TV, you may need HDR content and HDR-compatible TV. There are some major streaming services like iTunes, Nexflix, Amazon, Google Play, Vudu and YouTube support HDR for some of their 4K content. Some are using Dolby Vision for HDR while others are using HDR10. All major 4K capable media streaming sites can handle HDR in some form though lack of consistency. Amazon Fire TV and Roku Streaming Stick + can only handle HDR10 currently while Apple TV 4K and Google Chromecast Ultra support both HDR10 and Dolby Vision.

An HDR-compatible TV would take advantage of the additional information in the signal and the panel is calibrated to handle the information. Moreover, the HDR TV will produce a particular better picture which means it has the capable of evaluating HDR performance.

HDR vs 4K, What is the Differences?

HDR would sometimes is confused with another TV buzzword called UHD (Ultra High Definition) which is also known as 4K. Both HDR and 4K try to improve your viewing experience, however, they are nothing in common as different technologies. UHD is trying to bump up the pixel count while HDR try to make the existing pixels more accurate. So it is a matter of quantity and quality. 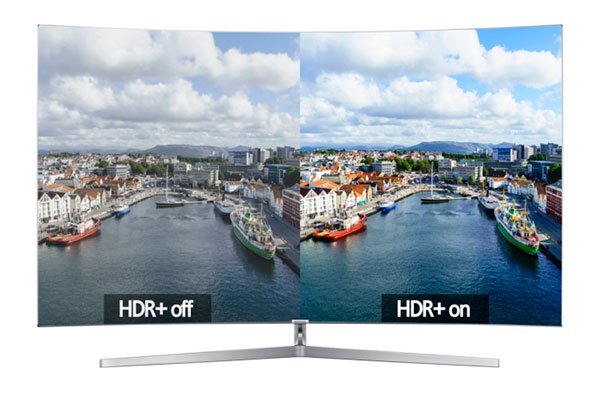 Currently, 4K and HDR tend to come hand-in-hand. So you can see the vast majority of HDR-compatible TVs on the market are also 4K Ultra HD TVs. However, HDR is the real step forward. HDR market is not yet mature, so if you want to buy a 4K TV for HDR-compatible, you may take a serious consideration. Since HDR is a high-end feature for now, the price of HDR TV is much higher than the non-HDR 4K TV today. Moreover, the HDR content has not yet been widely accessible. So it may be worth to wait for a while for HDR market mature and HDR content widely accessible before making the next big TV purchase.

In this article, we general introduce both definition for HDR photography and HDR TV. If you want to know more about HDR or get something to share, you can leave us a message below.