Whether you need to turn multiple memorable videos and pictures on your Android phone or make a series of wedding photos into an animated GIF, how to make GIFs on an Android device? Besides the GIF maker apps, you can find some popular apps has the built-in feature to make animated GIFs, such as Gallery, Tumblr, Facebook, and more. But when you need to have some professional GIF makers to create special and stunning GIFs on an Android phone, here are 2 more professional choices you should know.

Part 1: How to Create GIF Animation with Gallery on Android

If you just want some simply animated GIFs with the videos from the Gallery app on your Samsung, Huawei, or other Android devices, you can simply use the built-in feature to have a hassle-free experience in creating animated GIFs on Android without an extra app.

Step 1: Open the Gallery app on your Android phone. Locate and select the video from the desired album to make a GIF animation. Long press on an image to select multiple photos.

Step 2: Tap the Play button to playback the video and even rotate/flip the file. When you get the desired video clip, you can choose the GIF button to enter the GIF-making page.

Step 3: Select the GIF animation and adjust the details in the timeline. Then you can adjust the length and speed of the GIF. Tap the Save button to make the GIF an Android. 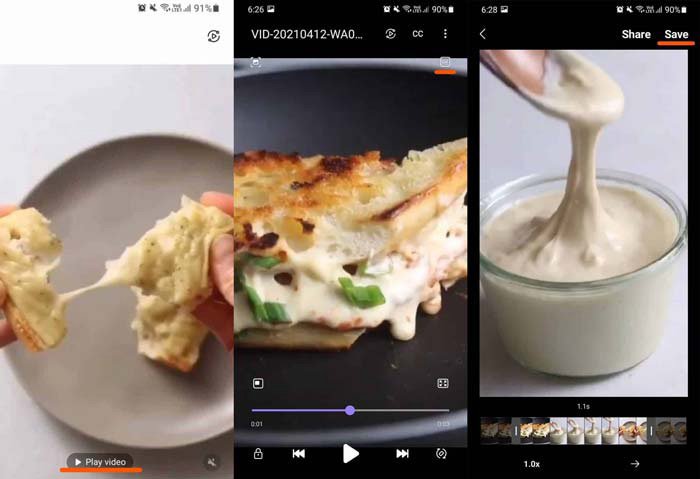 Besides the Gallery app, you can also use some social media apps to make GIFs on an Android phone, such as Tumblr and Facebook. Of course, you can also use a professional GIF maker to get some special and stunning GIF animation.

Method 1: How to Make GIFs on Android with Tumblr

When you need to make wedding photos from Tumblr into an animated GIF, you can simply use the built-in GIF-making feature with the Tumblr app. Moreover, there are multiple editing features to create a GIF on Android with videos and burst photos.

Step 1: Launch the Tumblr app on your Android and tap the Compose button at the bottom of the screen. Choose the red Photo button to snap photos with the camera directly or find a grid of the existing photos and videos you have on your Android device to make GIFs.

Step 2: Tap the desired video or a sequence of photos to create a GIF. You can preview the files in the timeline with a slide. You can adjust the speed of the GIF animation and add text or stickers.

Step 3: Just add stickers or text to the GIF animation. After that, preview the GIF highlighted with a blue label. After that, you can share the animated GIF by clicking the Next button. 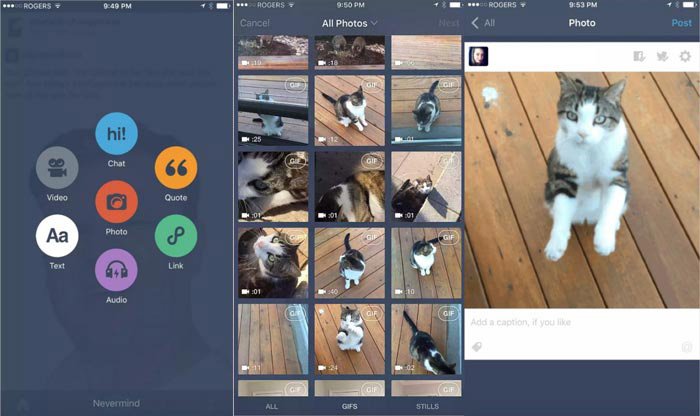 Method 2: How to Make GIFs with Facebook on Android

Facebook provides the Boomerang feature to make animated GIFs with multiple GIFs, stickers, text, and emojis. It enables you to customize the elements with the desired effects. Moreover, you can make a GIF on your Android on a blank screen or add one to a video clip.

Step 1: Open Facebook on your Android and from the News Feed menu, you can tap the Photo button to go to the camera icon in the upper right corner. After that, you can switch from Photo to Boomerang.

Step 2: Just import the photos from your Facebook account to turn the series of photos into a memorable GIF directly. Choose the different stickers, effects, filters, and more for your video.

Step 3: To make and edit the animated GIF, you can press the sticker or text and drag it to the desired position where you want it to appear in the animated GIF before pressing the Next button to post the GIF. 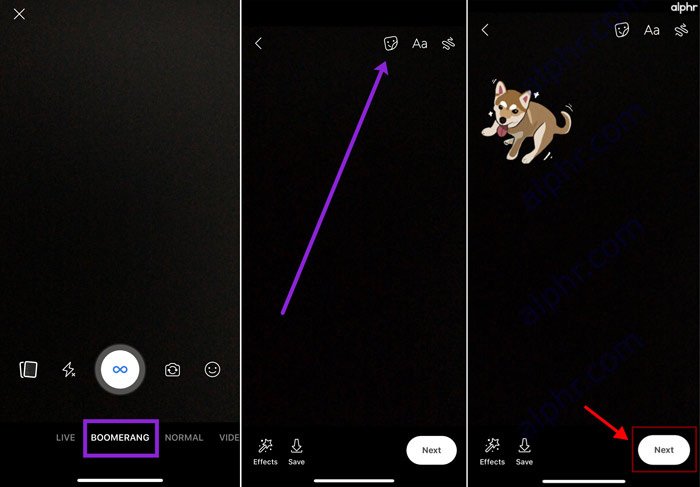 Method 3: How to Create GIFs via GIPHY on Android

When you need to make some professional GIF animation, you can choose a GIF maker app, such as GIPHY to create a GIF on Android from photos and videos. It provides multiple effects, advanced editing tools, and even a wide range of GIF resources to get the desired files.

Step 1: Launch GIPHY after installation, you can tap the Create button to switch to the Camera icon. It enables you to create live GIFs via the camera via the front-facing camera.

Step 2: Select a filter or effect from the Live Feed menu, which includes multiple stunning filters, such as VHS static, popcorn, and more. After that, press and hold the filter to make a GIF on Android.

Step 3: Once you have captured the desired scene, you can tap the effects, text, stickers, and even trim the desired part. You can add the tags before tapping the Share GIF button. 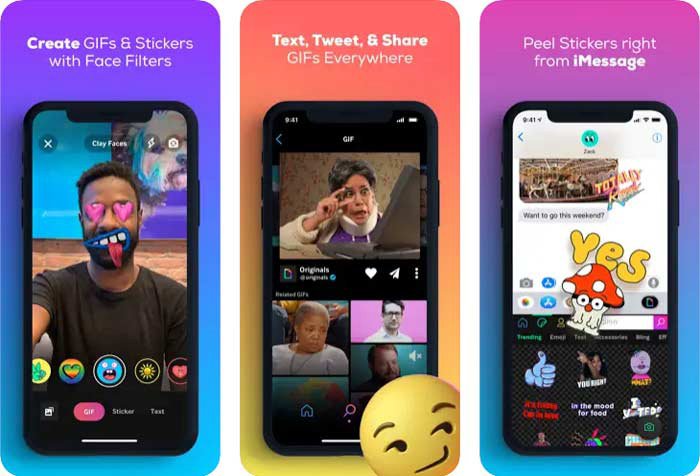 Is there a method to make GIFs from photos and videos from Android without limitation? WidsMob GIF is an all-in-one GIF maker to create a high-quality GIF animation. Besides the generic photo and video formats, you can also use WebP, HEIC, AVIF, RAW, and more files. There are multiple editing features and filters you can apply to the GIF animation.

2. Provide editing features to the cut out desired part, rotate, flip, and more.

4. Make high-quality GIFs with more than thousands of colors per frame.

It not only enables you to make GIFs with photos and videos from an Android phone but also supports RAW file formats from digital cameras, HEIC from Samsung phones, WebP, AVIF, and others. Moreover, it enables you to combine animated files, including the GIFs without conversion. 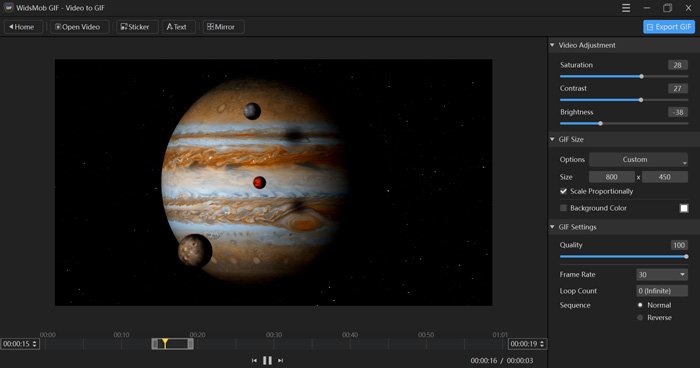 Provide the basic editing features to polish the files, such as cutting out the desired parts from a video, rotating/flipping/mirroring images, changing the sequence of imported images, and even correcting the HSL parameters, including contrast, brightness, and other. Of course, you can also combine different animated files into GIFs. 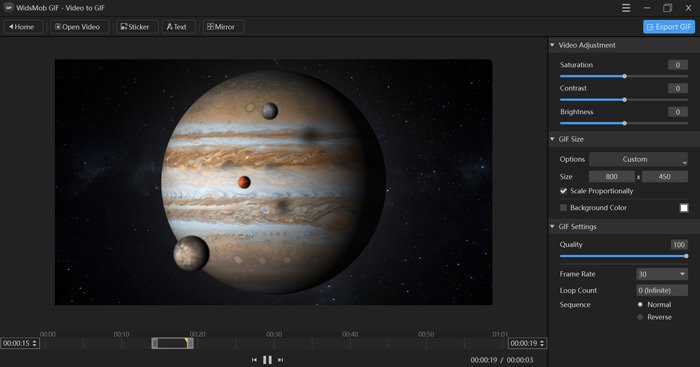 What are the special features of WidsMob GIF? Different from the Android GIF makers, it enables you to generate GIFs from videos with up to 50FPS. It also saves animated GIFs with a maximum resolution of 320 pixels and 10 frames per second. Moreover, it produces animated GIFs that use thousands of colors per frame. 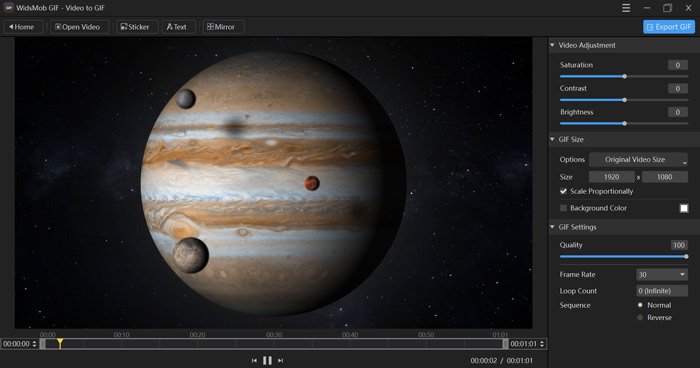 Here are the best methods about how to make GIF animation on Android. If you just need to make animated GIFs from some photos and videos within the app, simply take advantage of the default features. Of course, you can also use GIPHY to make some special ones on your Android directly or use the easy and professional WidsMob GIF to make high-quality GIFs with any file formats and stickers.