Live Photos – All Things You Need to Know

Many customers prefer to iPhones, because of the advanced camera technology. And Apple engaged in developing and upgrading camera hardware and software consistently. Live Photos is one of advanced camera features on iPhone 6s. With Live Photos feature, users could capture movement and sound one second and a half. iPhone 6s will save the movement and sound as animated pictures rather than videos. That is amazing, because a picture uses less space. As a new technology, many people still feel confused about Live Photos feature. Therefore, we are going to introduce all necessary things you should know about this new iPhone feature.

How to take Live Photos

Before learn the way to capture Live Photos, you should understand how iPhone produces Live Photos. When you use this feature, your iPhone captures the motion and audio for a 3-second video actually. And then it will turn the video into 1.5 seconds living memories. When you want to take a live photo, you can follow the steps below.

1. Unlock you iPhone and go to the Camera app on home screen.

2. Set to Photo Mode in the Camera app and hold your iPhone still.

3. When you are ready, tap the big circle button to take a live photo. 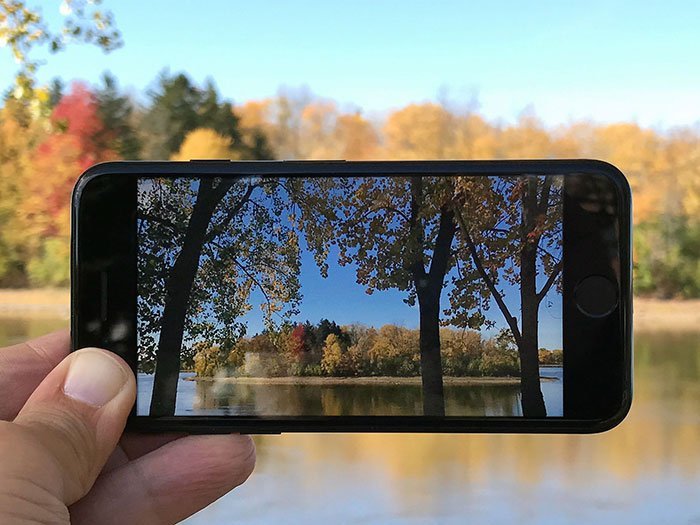 How to turn on or turn off Live Photos

Live Photos feature is on by default on iPhone 6s and later. If you want to switch to still image mode, the operation is simple too.

1. Go to the Camera app; press the Live Photos icon on top of the screen to turn it off.

3. On the right side, hit the Preserve Settings option and then turn on the Camera Mode. When you open the Camera app next time, it will work in still image mode.

4. If you want to turn on Live Photos, you just need to hit the Live Photos icon in the Camera app again. 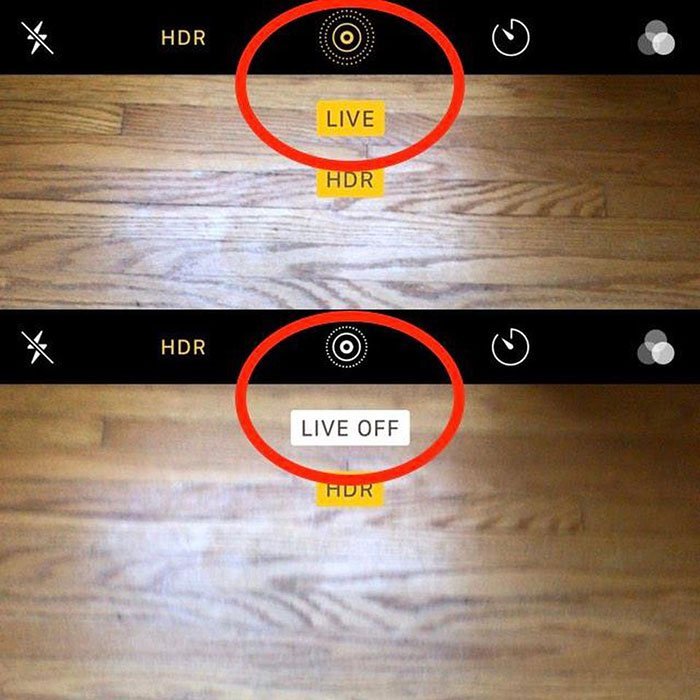 How to view and edit live photos

After you take a live photo, you may want to look at it immediately.

1. Go to the Photos app on your iPhone and open the Photos.

2. Find out the live photo you took and tap it.

3. Firmly press our screen and hold, you can see the photos come to life.

1. Access the Photos app on home screen and go to the Photos.

2. Tap the live photo you’d like to edit and hit the edit icon on top of the screen.

3. Then you can crop the live photo, adjust its light and color, or add filters on it as you wish. 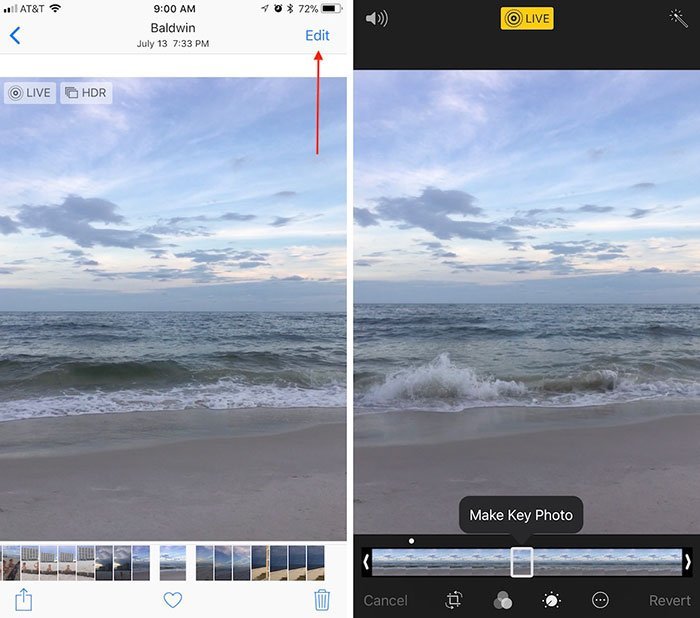 1. Locate to the live photo you want to share in the Photos app.

2. Tap on the Share button on top of the screen and press the LIVE overlay on the photo to switch between Live Photo and still photo.

3. Then you can hit any service you want to share the live photo to.

If the receiver wants to view the shared live photo, they must have the latest iOS or Messages. And the services, such as mail, will turn the live photo to a still image automatically. 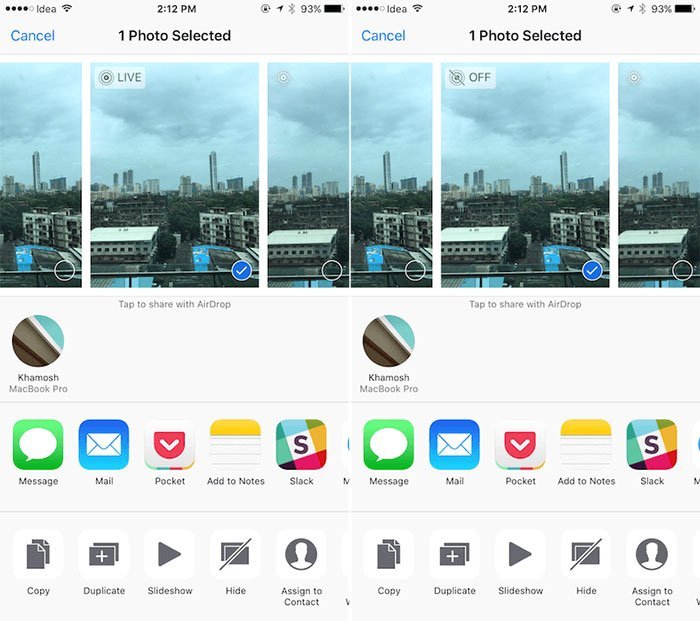 How to set a live photo as wallpaper

After you took a perfect live photo, you may want to see it once you open you iPhone. Fortunately, iPhone 7 and 7 Plus has equipped 3D Touch technology, so you can set a live photo as wallpaper and activate it on the locked screen.

1. Navigate to the live photo you want to set as wallpaper.

3. Adjust the frame of the live photo by swiping and pinching until you are satisfied.

4. Preview the effect of the live photo by pressing down to make sure it works as you wish.

5. Select the Live Photo button, the hit the Set button and choose Set Lock Screen to complete the process. 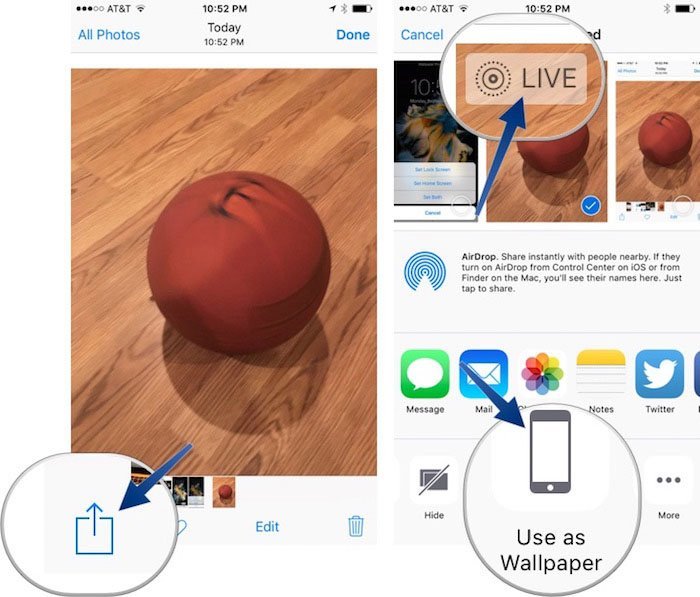 How to convert Live Photos to GIF or video

1. Install Motion Stills on your iPhone from App Store. Run this app and permit it to access your photos.

2. Tap on any live photo to convert it to GIF. Then you can share the live photo as a compatible animate picture format.

3. Motion Stills also has the capacity to stitch multiple live photos and produce a short movie.

In this article, we have discussed about the new feature, Live Photos on iPhone 6s and later. It is said that a picture is worth a hundred of words. Then an animate picture must be worth more than a thousand of words. iPhone’s Live Photos feature allows users to capture 1.5 seconds movement and sound and save it as a picture. And live photos could be shared and viewed between iOS devices. If you have an iPhone 7, you can use a live photo as your wallpaper and activate it by 3D Touch. Unfortunately, live photos are not supported on other platforms. So, if you want to share your live photos, you’d better convert them to GIFs or videos.